When my wife and daughters talk about bras and other female accessories in my presence, that’s too much information (TMI) for me. Or when they reveal certain information on the relationship of one of my girl’s boyfriend, that’s also TMI. 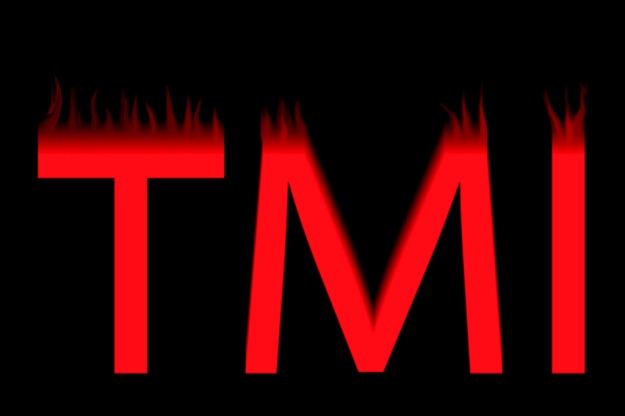 When my older customers introduce themselves during our networking events, they may reveal TMI. Such as how they were let go from their previous employer or how they have been out of work for a certain number of months.

What these folks fail to realize is that there are situations when disclosing your deepest and darkest secrets is not a wise move. And a networking event is one of them. So when is it harmful to your job search to disclose TMI?

But let’s look at times when you shouldn’t.

I’ve already mentioned networking events. But this deserves more discussion because this is a time when you have a large number of people listening to you deliver your elevator pitch, or simply talking with you one-on-one.

This is a time when most people are listening for confidence, not defeatism; when they want to hear a positive tone, despite your feeling of despondency. After all, the purpose of networking is to create relationships that are beneficial to you and your networking partners.

Many people don’t realize that whenever they talk with someone in their community, there’s a chance, slight as it might be, that they might know of someone with whom you can speak, heard about a job opening, or even know the hiring manager of the department in which you’d like to work.

Therefore, it’s wise to not disclose TMI to anyone with whom you speak outside the home. Sometimes in my workshops I’ll listen to people as they talk about how they were unjustly let go. Workshops are part of your community and not where you should share this information unless asked.

I reiterate, if you want assistance from people, you need to come across as calm, friendly, and even confident. If you appear confident, others will be confident in your abilities.

Often I’ll see TMI shared on LinkedIn. What people need to realize is that recruiters, hiring managers, and HR are trolling LinkedIn for talent and that they read what people write. So if you come across as angry or you share inappropriate posts, you’re hurting your cause.

Many people reason that because they’re working, they don’t need to be concerned about sharing TMI. To them I say, “Nothing lasts forever, including your job.”

Family member would love to help you find your next job and get out of unemployment. They really would. However, many of them are not in a position to help you. Sure, they may hear about an opportunity that seems right for you…85 miles from your home.

Am I saying you shouldn’t let family know you’re out of work? No, not at all. Just be selective as to which family members you share a great deal of information with. Cousin John, for example, is in your industry and understands the job of an accountant. Therefore, he is an ideal person to talk to at length.

The others. They’re the ones who you mention in passing that you are in transition. Explain what type of job you’re looking for and some of your best strengths. Going into a long drawn-out story about your unfortunate situation will probably garner some sympathy, but will not instill confidence in you.

There are questions that are meant to determine if you raise any read flags. The most obvious are the weakness question, why you left your last job, and even tell me about yourself. Be aware of questions like this. Don’t disclose too much information that can hurt you.

Rather share information that shows the value you bring to an organization. Your answers to questions that ask for a negative result should be brief; no longer than 30 seconds. And they should always circle back to what you’ve learned from the experience.

Ironically my clients tend to describe every nuance of their weakness. At times I need to put up my hand and loudly say, “Stop.” Then they ask me if they’ve gone too far. TMI. Interviewers do want to hear self-awareness, but enough is enough. TMI.

As career consultants, we always stress telling the truth. But there is such thing as too much information (TMI). Know when you need to speak in a positive manner, as when you’re out and about; and know when you should avoid disclosing TIM at interviews.