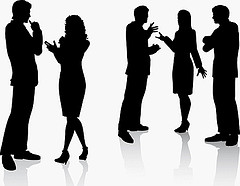 Recruiters and staffing agencies are not only concerned about job candidates’ hard skills; they’re also concerned about their soft skills. And this makes sense. Who would want to hire a dud who brings the operation down with his attitude? Jon Prete, “Who would you hire: Charlie or Ashton? It’s all about attitude!” and Jeff Haden, “The 5 Biggest Hiring Mistakes,” both emphasize the importance of hiring someone who will be a good fit.

This said, how should you prepare for the job search with this in mind? Here are five areas of your job search to focus on.

Be the round peg for the round hole: “The outstanding salesman with the incredible track record of generating business and terrorizing admin and support staff won’t immediately play well in your sandbox just because you hired him,” writes Haden. Let’s face it; if you’re difficult to work for, you have one strike against you already.

Look at yourself long and hard and determine what areas in your personality you might improve. Also determine in which work environments you feel most comfortable. If you’re a demanding person with little tolerance, you might consider an atmosphere with other demanding people…where you can’t terrorize other people.

Show it on paper: Many jobseekers say writing about their soft skills on their résumé and in their cover letter is irrelevant. This is bunk, especially with your cover letter. I don’t suggest that you use clichés like, “hard worker,” “team player,” “dynamic.” I suggest you illustrate these traits through your accomplishments. Show rather than tell.

A Manufacturing Manager who has a team-work approach and leadership skills might write: Consistently met production deadlines through collaboration with colleagues in various departments and providing effective leadership to (formerly) unmotivated subordinates. Result: Products were shipped to customers with a 97% return rate.

Talk about your soft skills while you’re networking: “I hate bragging at networking events,” I’m constantly told. “Nobody wants to hear about my personal qualities.” Yes they do. If someone is going to recommend you to a solid contact, wouldn’t you like to be assured that she will tell him that you loved what you were doing; you were a positive influence on you co-workers?

Demonstrate your enthusiasm while you’re networking, whether at events or on the sidelines of your daughter’s soccer game. Instead of saying, “I’m innovative”; say, “I came up with ideas that were often implemented and led to significant cost savings.”

Of course demonstrating your soft skills at the interview is important: This goes without saying. Interviewers today are using behavioral questions to find the people with the right attitude. “If crafted properly,” states Prete, “behavioral questions can provide a glimpse into a candidate’s decision-making process as well as their values. [Leadership Development Advisor, Beth Armknecht Miller] believes that a great majority of employees fail in a company because their soft skills and values don’t match those of their manager and company.”

Unlike the résumé where you have limited space, the interview provides you the platform to tell your stories using the STAR (situation, task, action, result) formula. You may be asked about your ability to effectively discipline subordinates. “Tell me about a time when you were effective in disciplining an employee. How did this help the employee perform better?” Have a story ready.

Seal the deal: The interview is not concluded until you’ve sent a follow-up letter, I tell my workshop attendees. This is another opportunity to emphasize your strong personality skills, making you a better fit for the position than other applicants. Many jobseekers fail to send a thank you note, and some don’t get the job for that reason.

A former customer recently wrote me, “The HR person really liked my hand-written thank-you note; said it was rare.” The message here is that you can stand out as a courteous, professional, and follow-through type of candidate simply by sending a thank-you note.

Jobseekers generally think that recruiters and staffing agencies care only about the technical skills. (After all, recruiters can’t present a zebra with orange stripes to their client when a zebra with black stripes is called for.) But two recruiters are telling you that employers want a great personality fit, as well. Take their advice and sell yourself as an all-around employee from the very beginning.

3 thoughts on “5 things to consider for an interview; it’s not all about the hard skills”