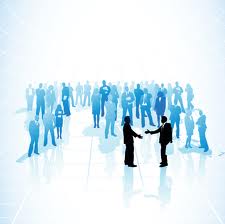 I read an entry on the Personal Branding Blog  which stated, “According to ABC News, 80% of today’s jobs are landed through networking.” This percentage of networkers represents smart jobseekers who understand that looking for and finding work takes…work.

They understand that personal networking coupled with online networking will yield better results than spending the majority of their time on Monster.com, Indeed.com, Dice.com, CareerBuilder.com, and other job boards.

Smart jobseekers attend networking events consisting of jobseekers, business owners, professional associations, meet-ups, etc. However, networking events are not smart jobseekers’ only, or even major, source of networking. They also utilize their rich network of former colleagues, friends, relatives, neighbors, acquaintances, and others; or start the building process…and keep it going once they’ve landed a job.

Experts like Martin Yate, Knock ‘em Dead: Secrets & Strategies for Success in an Uncertain World,  will tell you that companies want to promote from within first; only when there are no appropriate internal candidates will they rely on referrals from employees (who get a bonus for a successful  hire) and people who will approach them through informational meetings. The latter category of jobseekers (you) have the benefit of getting known before the job is “officially posted.”

“…employees who come to the company ‘known by us’ in some way are seen to be better hires and thought to get up to speed more quickly and stay with the company longer,” he writes. And this includes you. This is where relentless networking comes in, whether you contact someone at a company so they can get your résumé to a hiring manager, or you contact a hiring manager in your desired department to set up a “meeting.”

Pam Lassiter, The New Job Security, understands that networking can be daunting, particularly for Introvert types, but encourages jobseekers to do it, “Using your networking wisely is a muscle you can exercise and develop if you haven’t already. Outplacement and alumni career services surveys report that 65 to 85 percent of jobseekers find their jobs through networking….”

Some jobseekers misunderstand the purpose of networking. They think it’s all about them. They constantly ask without giving, which is the quickest way to drive away potential allies. People who have the true networking mindset realize that they should first help others, before thinking of themselves.

The bottom line is helping other jobseekers will help you. Paying it forward increases your odds of landing a job. And, there are plenty of great networkers who will help you, as they realize they’ll eventually get help from others. They are patient and determined.

Here’s what one of my customers, who recently got a job, told me about proper networking: “Have a conversation with people [as opposed to] giving them a 30 second commercial.  It’s not about “I need a job.”  Have a really good conversations with a few people at an event and listen to what their needs are.   Think of how you can really connect with them and support them vs. just getting a business card.

Networking only makes sense, so I’m perplexed as to why some jobseekers don’t embrace it. I know that personal networking means going outside one’s comfort zone, particularly if you’re an Introvert (as an Introvert, I know the feeling). Developing the attitude that “I just have to do it” will help you over the hump.

2 thoughts on “No one said networking is easy; be smart and make the effort”