As seen through the eyes of The Intern.

I’ve always been a big fan of Anne Hathaway and Robert De Niro, so when I was searching for a movie to watch on TV, I settled on “The Intern.” Admittedly I thought this might be lame movie. I mean I hadn’t heard anything about the movie, not even from my daughter who sees every movie released in theaters. So I thought, what the hell. It’s worth a try. 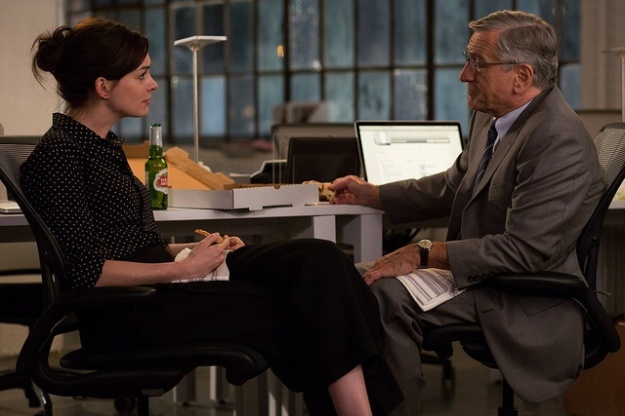 But I was pleasantly surprised. The premise of the movie is that a very successful clothing Internet business launches an intern program for older workers. De Niro applies, wins the internship, and is assigned to Hathaway, the founder of the company.

At first, it’s not a good match, as Hathaway clearly demonstrates her biases against older workers. And honestly, I’m not sure De Niro is going to work out. I mean the guy confirms every older-worker stereotype.

But there’s so much to learn from De Niro’s character. So much that Hathaway learns from this older intern. So much for us to learn about the value of the older worker.

De Niro overdoes it by going to work at a technology company dressed in a suit and tie. He’s clearly out of place at first, then the employees and audience see the charm in the way he dresses. He adds class to the organization.

Similarly my customers, most of whom are older workers show up for my workshops dressed for the job search. They dress prepared to run into their next employer, whereas their younger counterparts don more comfortable Tee shirts and jeans, unaware they’re always on stage.

2. Older Workers Have Been There, Done That

While it’s unfortunate that De Niro has lost his soul partner, he arrives at the company with valuable life experience that lends well to his wise decisions. He is Hathaway’s support system. In her words, “My best friend.”

I see the same life experiences in my customers; people who have suffered loss or have experienced trauma in their own lives. They’ve learned from this and developed a calmer attitude. Small issues don’t affect them like the issues might have in their younger days.

It goes without saying that older workers also possess more job experience than younger workers. He comes to Hathaway’s company a former VP of sales, which intimidates her. Unfortunately many younger managers feel intimidated and think older workers want their jobs. This is not true.

Well maybe differently than younger workers.In the movie the majority of  employees we see are Millennials, making me feel quite old. Technology like Snapchat, Instagram, Twitter, Facebook are thrown around as if they’re a natural part of life. It is their way to communicate.

To emphasize a Millennial character’s reliance on technology, De Niro has to teach him that it is NOT acceptable to make up with a woman via texting. It finally dons on the younger worker that he has to “talk” to the woman.

Verbal communication skills are the strength of mature workers, not because they reject texting, email, and social media. Because they understand the value of the human voice and body language, how they are more direct and personal. Business still conducted with face-to-face interaction.

Hathaway’s character is an entrepreneur, independent, and decisive. She has a great sense of how to run her business and is very successful. But when the chips are down and Hathaway needs moral support, De Niro is there to mentor her in a way that only an older, wiser person could.

Older workers are often managers or colleagues who effectively mentor younger employees. They’ve gained years of experience achieving success, as well as making mistakes. Note: one of my customers recently landed a job as a Technology Mentor at a large medical corporation.

5. Older Workers are Vibrant in Their Own Way

At the beginning of the movie and at the end, De Niro is seen performing yoga in a park. It is his way of being vibrant as a 70 year-old man. The way he carries himself throughout the movie shows a determined vibrancy.

I told my workshop attendees that it’s generally unrealistic to believe that a 50 year-old employee could keep up with someone 20 years younger. However, older workers can pace themselves. They may not work as fast as younger workers, but they tend to work smarter and make less mistakes. I’m thinking of the tale of the tortoise and hare.

I question whether the intent of the movie was to demonstrate the value of the older worker, or if it simply made a good story line. As I tend to do in my daily life, I see most things as work related. Nonetheless, this is a movie that has a great message; when the chips are down, the older worker will come through.

Now read a related post, Younger interviewers, 9 reasons why you should not discriminate against older workers.

I Value Your Feedback!

6 thoughts on “5 strengths of the older worker”