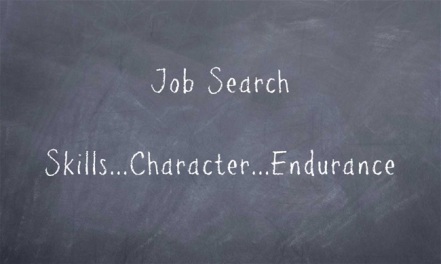 This past weekend my son participated in a soccer tournament for the state championship.

What this means is he played eight additional games for a total of 18 this spring.

This also means I coached 18 games. I never thought I’d say I’m sick of the world’s most popular sport, but I am.

The teams that succeed in reaching the state finals had three things going for them: skill, character, and endurance. The coaches and parents were just plain crazy for sticking it out.

Similarly jobseekers who succeed in landing a job—the winner of a state final in soccer of the job search—demonstrate the same three traits throughout the entire process.

The most obvious example of written communications would be the résumé, which above all else must address employers’ needs by demonstrating the required qualifications. Employers want to see the skills and accomplishments needed to do the job well, not a generic, one-fits-all document.

The interview is the ultimate display of verbal communications. Let’s face it, if you can’t pass the interview, you don’t get hired. Only one person gets hired, and this is the person who shows he/she has the skills and accomplishments that fit the job. Know what skills the employer requires, so you can better predict the questions that will be asked.

Character.  This is a vague term but is essential to achieving likability, demanding respect, and showing humor. You must show your character when networking. Networkers appreciate other networkers who they understand—think clarity of skills and goals—as well as those who are willing to help them.

Your character is essential at the interview, as it demonstrates your interpersonal skills, motivation, enthusiasm, ability to work as a member of a team, and other desired “soft skills” the employer is seeking.

Your character also shows itself in your written communications. Many of us have received LinkedIn messages that are negative in verbiage and tone. The writers complain and make excuses about their past failures, showing a lack of self-awareness. This is another way for people to show a lack of character.

Endurance. This is perhaps one of the most difficult of the three components to sustain. Sadly I must admit I was willing–nay hoping–for the soccer tournament to end, because I felt my energy drain from me with each game.

Jobseekers sometimes feel this way, especially if the interview process stretches to five interviews over a period of 5 weeks. Some of  my customer have described this hellish situation to me.

This is when a jobseeker must reach down deep in his soul to move on, not dwelling on the worse–he doesn’t get the job. Maintaining endurance is a matter of treating yourself well during the process.

Get enough sleep, spread your research out over a period of days and not cramming like a college student, and take a well advised break are some of the things you should do to keep the endurance. My response to jobseekers during these times is stay the course and do your best.

Endurance is also required when writing tailored documents for each job, as opposed to blasting 20-30 resumes and cover letters over the Internet, or should we say into the black whole. Every resume and cover letter is unique to every job.

Jobseekers must faithfully attend networking events or network in public whenever they get the opportunity. LinkedIn is a great way to network online, but it should not replace face-to-face networking. Demonstrating excellent skills and character is essential when speaking with others who may be able to help you, so consistency is important as you brand yourself.

My son’s team was eliminated from the tournament in the semi-finals. You might think I was relieved, and up to the point where the final whistle blew, I thought I’d be happy for it to end; but I was actually disappointed that the games were over. The boys demonstrated skills, character, and endurance throughout the whole season. This is what I hope my customers are able to sustain. Of course the stakes are much higher–after all soccer is a game–but the same principles apply.